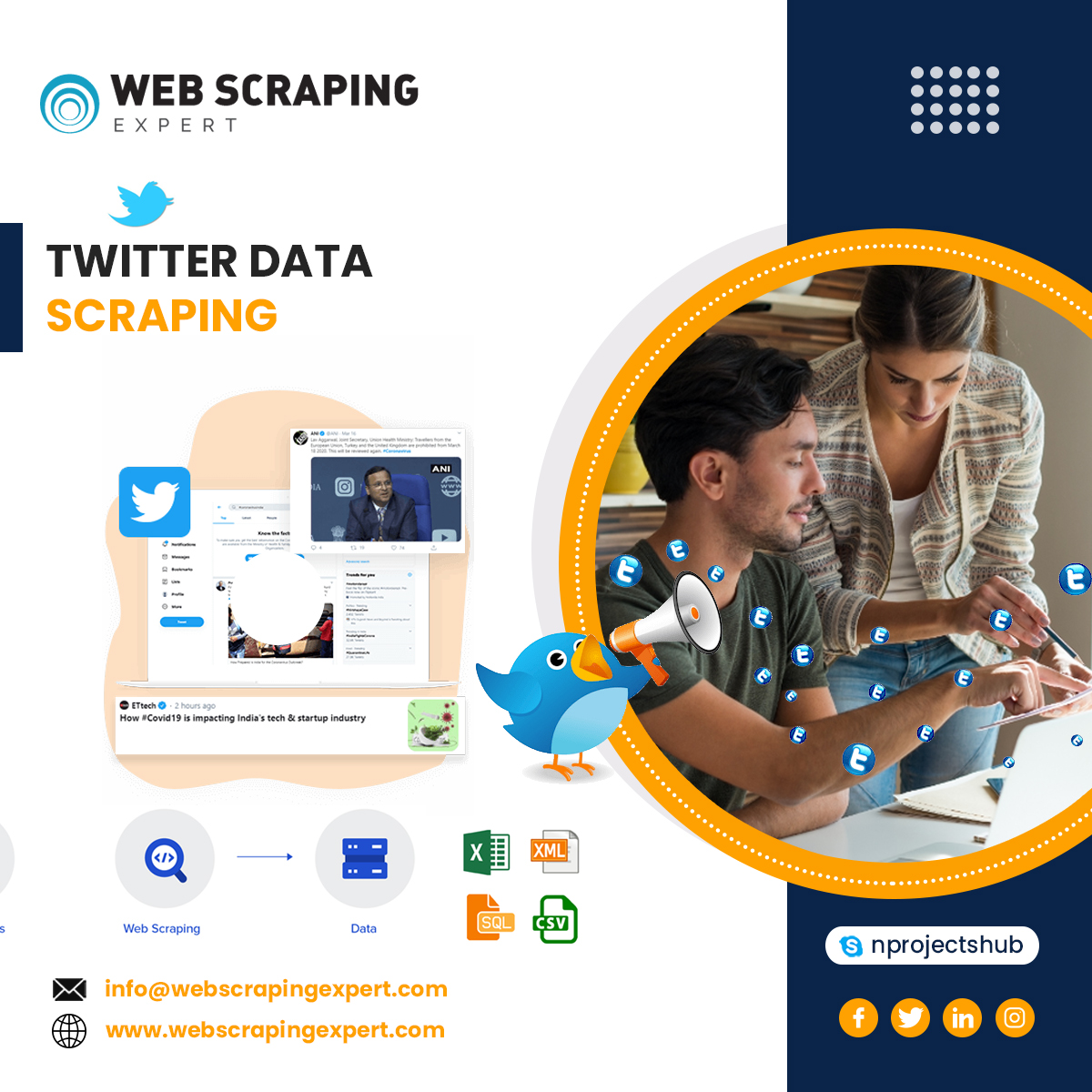 Twitter is one of the most widely tracked social networking websites today. Twitter web scraping is one of the best ways to find followers in large numbers as well as extracting their Twitter usernames. We take care of all your Twitter Data Scraping requirements. With Facebook, LinkedIn, and Twitter, we can connect to a lot of people. However, extracting followers and tweets from twitter is tedious job, so we need Twitter Data Scraping services or Twitter Scraper.

List of Data Fields
At Webscrapingexpert, we usually scrape the following data fields for twitter.com:

Twitter Historical Followers Scraping Services
Twitter followers are a valuable commodity for businesses and individuals. When someone follows you on Twitter, they are given an opportunity to receive updates from your account in real time. With Webscrapingexpert, we provide the best way to scrape Twitter followers’ data, as we understand the needs and uses of various screen scraping and Twitter data extraction applications. Twitter followers scraping services are a great way to get a wide range of followers for your account.

Scraping Tweets from Twitter
The Twitter data is a rich source of human behavior and special representations. Harnessing as well as analyzing the data can help companies gain insights regarding customer perceptions about recent trends, offering them the opportunity to stay ahead of the curve. Analytics on Twitter are used to build brand awareness, improve customer service, detect fraud, and develop marketing strategies.

Twitter Image Scraping Services
Twitter is a great way to stay up-to-date on the latest news and events, as well as connect with other people who share similar interests. But how do you get the images that are featured on Twitter? Twitter Image Scraping Services are tools that allow users to extract images from a particular Twitter account. This can be useful for creating summary or analysis pieces, as well as for compiling lists of popular tweets from a certain account.

Twitter Hashtag Scraping Services
We Provide tool that can extract tweets with specific hashtag. Twitter has long been a great way to share updates and thoughts with your followers, but it can be difficult to find the right hashtag to use when you want to share a particular piece of information. Twitter Hashtag scraping is a simple way to automatically find the most relevant hashtags for a given topic or tweet.

Scraping Likes, Comments, Retweets from Twitter
There are many interesting options on Twitter, including likes, comments, retweets, and sharing. By scraping all these data, you can get very valuable information about your competitors, which will help you lead the market. With our Twitter data scraping services, you can scrape details likes, comments, retweets. Our web scraping services are needed to collect Twitter data that are chosen by most modern websites that target Twitter subscribers as well as other social media users.

Scraping Instagram Comments
If you’re looking to get a little bit more insight into the thoughts and opinions of your followers on Instagram, you can always use a tool like Instagram Scraper to extract all the comments from a particular post. This can be a great way to get an idea of what people are talking about and what kind of topics are generating the most interest. There are many benefits to scraping Instagram comments, including gaining insight into what people are interested in and what topics generate the most discussion.

Facebook Events Data Scraping
Facebook events data is a valuable source of information that can be used for marketing and business purposes. We can extract Event Details like Event title, Time & Date of Event, Images, Location, and Contact Details etc.

If you are looking for the Twitter Data Scraping Services or Twitter Scraper then email us at: info@webscrapingexpert.com.